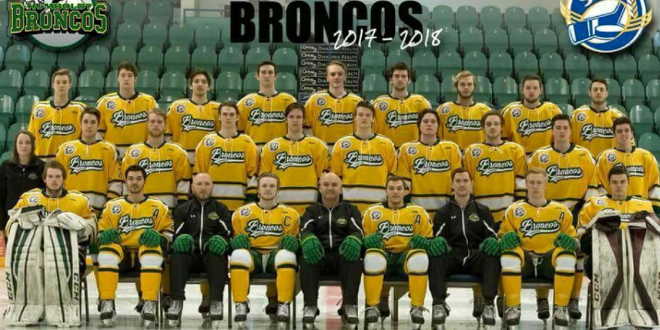 Editorial: Jersey Day Takes Over The City And Entire Country

It’s incredible walking around the city of London, and seeing so many people wearing a jersey in honour of Jersey Day – a day intended to provide love and support to the Humboldt Broncos community. There are hockey jerseys, football jerseys, soccer jerseys, Knights jerseys, Leafs jerseys, Blue jays jerseys, Raptors jerseys, Argos jerseys, Team Canada jerseys, Canadiens jerseys, Bruins jerseys, Manchester United jerseys, and more. You can pick out the people NOT wearing jerseys more easily than the ones that aren’t. Business people foregoing their every day business attire, to support the Humboldt victims. Entire schoolyards of children running round in easily-spotted jerseys.

It is a tremendous outpouring of support, that is sweeping not only this city and the entire nation, but apparently reaching all over the world.

It’s been six morose days since the Humboldt Broncos were travelling on a bus that collided with a semi-truck at a now infamous intersection near Tisdale, Sask. Sixteen passengers were killed, thirteen others were injured. On their way to a playoff game in Nipawin, Sask., that they would never arrive for.

A group of hockey parents in British Columbia started the hashtag #JerseysforHumboldt on Facebook as a way to honour the Saskatchewan junior hockey team. Word spread like wildfire, and hundreds of thousands of people have today donned a sports jersey or worn a green ribbon. Search for #JerseysforHumboldt on any social network and you will be overwhelmed with just how many people have come together. There are over 32,000 photos on Instagram.

London stands with you, @sjhlbroncos. (Don’t forget to wear a sports jersey tomorrow to show your support!) #nationaljerseyday #humboldtstrong -@kellynichole

There are a lot of great tweets as well:

Today, we had many LPS employees wear jerseys for #JerseyDay showing their support for the Humboldt Broncos and the Humboldt Community. Thank you to everyone who wore a #JerseyForHumboldt today. #HumboltdStrong #PrayersForHumbolt #jerseysforhumboldt #ldnont #sticksforhumboldt pic.twitter.com/WjlymrnSlG

City staff wearing their #jerseysforhumboldt. Sending love and support to all those affected by this tragedy. #humboldtstrong #ldnont pic.twitter.com/QsE3Bs1X97

It is simply one of the most heart-breaking news stories to ever hit my stream of consciousness. It’s hard to spend even a moment thinking about it without getting incredibly upset. Those kids. They were just kids. They were just boys living the Canadian boys’ dream and enveloping themselves in their own little hockey world. As many young Canadian boys are fortunate enough to do. And it all got taken away.

If there’s a place in this world where more “male bonding” goes on, than in a hockey dressing room, I’ve never heard or found it. So to think of the complete devastation and heartache that has befallen the Humboldt community is something that touches the heart of nearly every single person living in Canada.

And brings many of us to our knees in sorrow for those families. There are obviously so many Canadians having spent so much time on the road, heading to a hockey game or practice.

Today’s support from Londoners shows just how much this tragedy has affected people. And how important community is to people of this city.

How important their hockey teams are to them.

God bless the entire Humboldt Broncos community. May they find the strength and conviction to move on from this horrible tragedy as best and as quickly as they can.

They have an entire nation behind them.

Our thoughts and prayers are with them all.

We wear our jerseys, and green and gold, to show our support and send our love to the families and community of the #HumboldtBroncos. #JerseysForHumboldt #HumboldtStrong #JerseyDay #SenCA pic.twitter.com/O9s9N04Feo