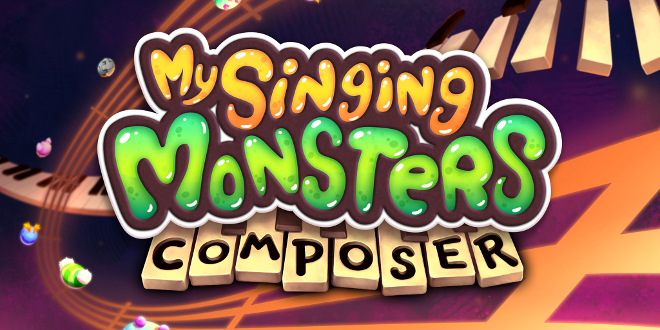 How do you make one of the world’s most well known mobile games even better? Think outside the box, and create a revolutionary rendition of the hit game, but add powerful composition tools, and turn it into a full music-making app, as well as a game. At least that’s what the makers of the hit mobile franchise My Singing Monsters and London technology giant Big Blue Bubble did; and once again, it promises to be spectacular.

My Singing Monsters Composer was released today ​worldwide on the App Store and Google Play for $4.99 USD. The all-new mobile game from Big Blue Bubble brings together your fan favourite characters from My Singing Monsters and puts them on a never-before-seen island. The hook? It lets the player compose their own songs using a robust music editor.

It’s easy for the scope of that to not immediately register. Players can actually now write songs using the game’s built-in keyboard or by placing notes directly on the staff! They can can write musical parts for each character of their choice, and then combine the unique vocal, percussive, and instrumental sounds of each Monster, to create their own original compositions.

Players don’t even need to be online, as My Singing Monsters Composer is a standalone app.

Founder and CEO of Big Blue Bubble Damir Slogar, is excited about the latest installment of the hugely successful franchise: “Composer Island has always been a favourite among fans of ​My Singing Monsters​. We’re happy to say that now, even players new to the franchise can enjoy composing music with the Monsters.”

“The game improves upon the existing features of the original Composer Island by introducing a keyboard, more music tracks, offline play, and many more Monsters planned for future release.”

Get more: Meet the Monsters

Considering that Slogar has been making games ostensibly since there were programmable “home computers”, it has to be almost surreal to think back to his days creating his first game on a Timex / Sinclair ZX81 – a computer that had 1KB, monochromatic output, and the overall processing power of a hamster wheel. So stark is the contrast to the immersive, eye-popping, audio extravaganza that his My Singing Monsters Composer is, that it is difficult to even fathom the nexus between then and now. It has been a path that has carried Slogar and Big Blue Bubble, to the upper echelons of the gaming industry. The latest title represents not just an upgrade to a wonderful existing franchise, but an evolutionary new spin.

The game features composing tools, that while presented in a fun and kid-friendly intuitive user interface, are powerful, and capable of composing intricate, and creative melodies. There are also great tutorials that facilitate players of all ages and skill levels, being able to create monstrously fun tracks quickly and easily. Not only is it fun to play, but it is an excellent tool for practicing musical notation and learning songwriting; which makes it a wonderful way to introduce even the youngest of children to the musical process.

The pioneer in the gaming industry has a penchant for being the first to market with a variety of innovations in technology and game design. Having developed more than 100 video game titles since 2004, and establishing a reputation for original gameplay mechanics and revolutionary cross-platform game engines, the new addition to the My Singing Monster franchise is representative of that type of innovation.

So download the sizzling hot My Singing Monsters Composer today! Embrace your inner Monster Maestro. Breed them. Feed them. Listen to them sing. Then conduct a monstrously fun orchestra.

Just try to remember when you’re inventively composing Jingle Bells, and attaching it to Entbrat, that the company that made it possible, proudly makes it’s home in your backyard. In fact, Big Blue Bubble just built a beautiful new studio in the Bell building downtown, and will continue to not only be a big player in the mobile game industry, but a trend setter for other London technology companies for years to come.

Notes: Learn more about My Singing Monsters Composer and download the game.