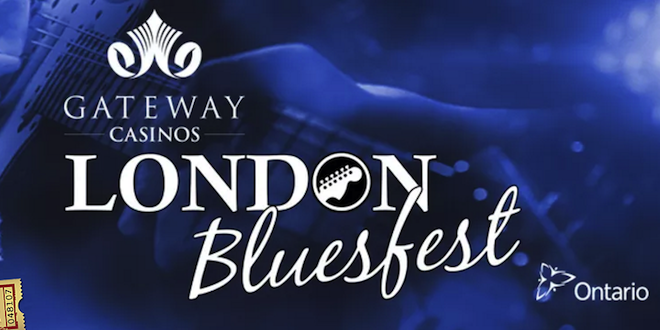 If you’re a fan of Jazz or the Blues and live in London, you’re being treated to a pretty good late week in August. On the heels of a great Wortley Jazz & Blues Fest this past weekend, London Bluesfest 2018 opens on Thursday, and it opens with a great FREE preview today downtown.

Five days of Blues. Starting with today’s free showcase of some of London’s great musicians at the Covent Garden Market, that will ultimately feature eight hours of jamming.

London Bluesfest 2018 itself opens on Thursday at Harris Park, and is a rain or shine event. Tickets purchased are for the festival not individual artists, and start at less than $50 ($46). A dollar from every ticket purchased will be donated towards MusiCounts, which is a music education charity that puts musical instruments in the hands of children who need them most.

Friday’s schedule is very similar with Earl and the Agitators, featuring Scott Holt getting things started at 7:00pm, Savoy Brown playing from 8:30pm – 9:30pm, and Foghat taking the stage from 10:00pm-11.00pm.

Make sure you bring your lawn chairs on Saturday and Sunday, which are permitted in designated areas of the general admission area at the discretion of festival management, because you’ll be treated to five acts and 7.5 hours of entertainment each day.

Saturday kicks off with Delta Stone and The War Dogs taking the stage at 3:30pm. Then it’s Ray Fuller and the Bluesrockers at 5:00pm, Anthony Gomes at 6:30pm, Mark Farner ( Grand Funk ) at 8:00pm and finally Colin James at 9:30pm.

James will likely be featuring songs from his 19th album, Miles to Go which is due out next month (September 21st) on Stony Plain Records in the USA and True North Records ROW in Canada. Miles to Go is James’ follow-up sequel to the critically acclaimed Blue Highways, and another “collection of carefully curated songs handpicked from some of the greatest blues artists”.

On Sunday, Cheryl Lescom gets things started at 3:30pm. Londoners may have seen Cheryl this past weekend at Wortley Jazz & Blues Fest as she performed with Soul Sausage. Bill Durst is on at 5:00pm, Dana Fuchs at 6:30pm, Kenny Wayne Sheppard at 8:00pm, and finally Blue Oyster Cult at 9:45 to close the show.

Blue Öyster Cult were formed in Long Island, New York in 1967, and their most successful work includes the hard rock songs “(Don’t Fear) The Reaper”, “Godzilla”, “Burnin’ for You” and “Shooting Shark”. They have sold over 24 million records worldwide, including 7 million records in the United States alone.

Tickets can still be purchased online at http://www.budweisergardens.com and at the Budweiser Gardens Box Office.

Some of the proceeds will be used to support spinal cord research.

More informaton:
*19+ / ID Required19+ / ID Required
*Artists are subject to change
*All ticket sales are final
*Tickets purchased are for the festival not individual artists
*Coolers or outside food or beverage not permitted