London mobile game giant Big Blue Bubble has made the mobile strategy game Chaos Reborn: Adventures available for pre-order worldwide at the App Store. The new instalment of the critically-acclaimed Chaos franchise by the creator of X-COM, brings all of the features of the celebrated Kickstarter Steam title Chaos Reborn to mobile for on-the-go tactical combat.

In the new Chaos Reborn: Adventures, players control a powerful wizard with a wide array of spells, weapons, and mythical creatures in strategic turn-based combat. It also features a challenging multiplayer mode where players can compete against their peers in battle to determine who reigns supreme, as well as the robust single-player narrative campaign.

Chaos Reborn: Adventures combines RPG-style turn-based combat with the tactical positioning of chess and the bluff of poker to create an entirely unique strategy game. Customize your wizard with 100s of gear items, spells, and mythical creatures to secure victory!

“As a fan of Julian Gollop’s Chaos series since its original release in 1985, I’m very pleased that our studio has been given the opportunity to bring the franchise to mobile,” said Damir Slogar, founder and CEO of Big Blue Bubble. “We hope to share that same excitement with Chaos fans around the world, which is why we’ve chosen to make Chaos Reborn: Adventures available to pre-order today on the App Store.”

Gollop founded Snapshot Games in 2013 with David Kaye. Their objective was to develop video games in the tradition of Gollop’s earlier titles with modern, high quality presentation and design. Their first title was a sequel to the classic Chaos game, called Chaos Reborn, and was successfully funded on Kickstarter in April 2014 and published in October 2015.

Now thanks to the partnership with Big Blue Bubble, the third instalment of the franchise is now available to pre-order worldwide on iOS devices. It is not yet currently available for Android devices, but there are plans for a future release.

“Chaos Reborn is quite simply the best strategy game on PC this year.” — Kotaku

“Chaos Reborn is already a brilliant update of an absolute classic.” — Eurogamer

Big Blue Bubble has more than a decade of experience creating fun, innovative, and accessible titles. With over 100 titles to date, Big Blue Bubble maintains a proven track record of being the first to market with a variety of innovations in technology and game design, solidifying the company as a long-standing industry veteran. 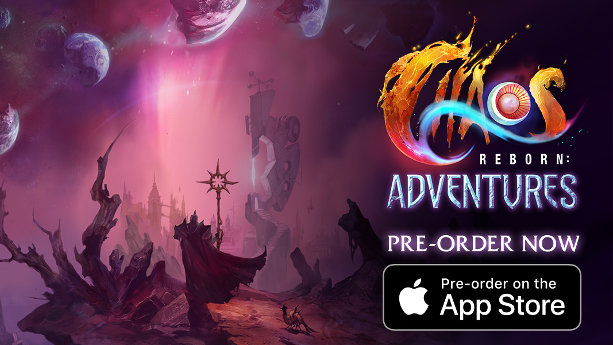