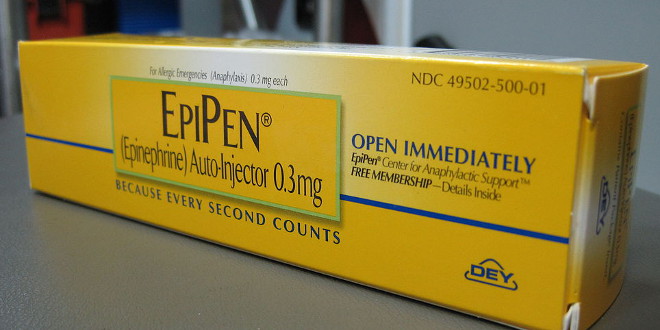 About That EpiPen Shortage Warning…

According to a CBC article yesterday, Canada could run out of EpiPens “in coming days or weeks.” At the root of the issue, is that Pfizer continues to experience supply shortages of EpiPen® epinephrine auto-injectors in the 0.3 mg and 0.15 mg doses, according to their press release.

Pfizer anticipates the next shipment of EpiPen® 0.3 mg to the Canadian market by late August 2018. At which time, limited inventory will be available and will continue to be managed through measured allocation. Until this new shipment arrives, shortages of EpiPen® 0.3 mg can be expected at the retail pharmacy level.

Pfizer Canada said it is currently able to provide the 0.15 mg EpiPen Jr, but supply is limited; so epinephrine injector for children is being carefully managed across the country.

EpiPen and EpiPen Jr are used to deliver an emergency shot of epinephrine to patients who are at risk of the life-threatening allergic reaction anaphylaxis.

There are no alternative auto-injectors (like Adrenaclick) available in Canada.

So, is the sky really falling?

Well, there’s no denying that the shortage is real. So to any family that relies on that EpiPen for an increased sense of security, the shortage is likely of concern to them. After all, the short shelf life has been a hot point in the news, and was a big part of Mylan’s rationalization for their sickening pay hike on EpiPens of some 5-600% since 2007.

If you didn’t already know, epinephrine doesn’t maintain its chemical integrity and can’t remain 100% potent for very long. That has in turn resulted in a short accepted shelf life for the product, of approximately 18 months – which is among the shortest in the drug industry.

But it is still 18 months. If you have an EpiPen sitting in your medicine cabinet that is 17 months old, then perhaps you have reason for concern that there might not be any EpiPens available through to the end of August. Otherwise, is the potential upcoming EpiPen shortage really that dire?

What if you had to use an expired EpiPen?

There is an article in Time in August of 2016 titled Do EpiPens Really Expire?. In the piece, Mohamed Jalloh, a spokesperson for the American Pharmacists Association and assistant professor of pharmacy at Touro University, California, explained that one of the reasons for short shelf-lifes for EpiPens, is oxidation: “The primary concern is that epinephrine will oxidize over time, and because of that, create a byproduct that is associated with hallucinations and other psychiatric symptoms.”

While that sounds a bit scary, EpiPens don’t magically turn toxic or unusable the day after the date on the box.

As for the byproduct that Jalloh pointed out, it is currently accepted that epinephrine oxidizes to Adrenochrome, which if you check the last sentence of Wikipedia’s Adrenochrome description, states that it doesn’t actually have any psychedelic properties.

Several small-scale studies (involving 15 or fewer test subjects) conducted in the 1950s and 1960s reported that adrenochrome triggered psychotic reactions such as thought disorder, derealization, and euphoria. Researchers Abram Hoffer and Humphry Osmond claimed that adrenochrome is a neurotoxic, psychotomimetic substance and may play a role in schizophrenia and other mental illnesses. In what they called the “adrenochrome hypothesis”, they speculated that megadoses of vitamin C and niacin could cure schizophrenia by reducing brain adrenochrome. However, these hypotheses have never been scientifically accepted; adrenochrome is not currently believed to have any psychedelic properties. Wikipedia

Jalloh also carefully added in the same article that, “As a pharmacist, if a patient needs an EpiPen and unfortunately the only one available is an expired one versus nothing, then the expired EpiPen is better than nothing in relieving the shock symptoms.”

Many doctors say that using an EpiPen that’s expired by a few weeks or even a month or two is better than not using one at all.

In fact, a study was authored by Lee Cantrell, professor of medicine and pharmacy at the University of California, San Diego. His team measured the epinephrine concentration of forty expired EpiPens and EpiPen Jrs. They found that 29 months after expiration, the pens contained at least 90% of their stated amount of epinephrine. With pens that were 50 months past the printed expiration date – more than four years past due – pens still had more than 84% of the medication.

“Essentially, all of these would still be in the recommended therapeutic range,” said Dr. Thomas Casale, a professor of medicine at the University of South Florida and executive vice president of the American Academy of Allergy, Asthma, and Immunology.

None of this is meant to diminish someone’s need or desire to keep a “fresh” EpiPen at their disposal at all times. If you’re someone who potentially needs epinephrine, then take the opportunity to check the expiration date on what you have.

If it’s 18 months old, or expires this month, you need to get a new one.

If you have to wait until next month to get one because of the imminent shortage, just try to keep the following caveat in mind:

You may or may not experience some hallucinations if you use an expired EpiPen, but you should also get enough epinephrine to keep you from life-threatening anaphylaxis.

Photo Credit: By Intropin [CC BY 3.0 ], from Wikimedia Commons