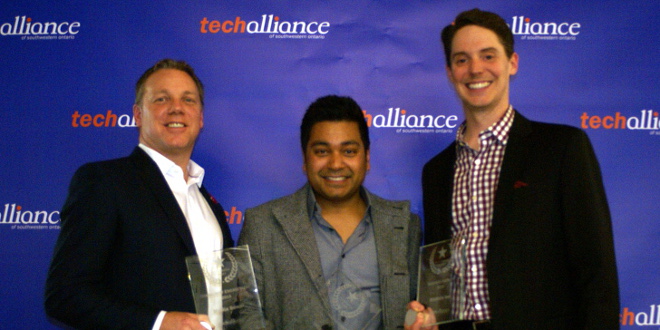 The Techcellence Awards celebration took place Thursday night, as part of London Tech Week 2018. Put together by TechAlliance, the awards celebrate tech entrepreneurs, start-ups and established tech companies in the categories of Startup Innovation, Business Growth and Community Engagement. It offers a unique peak into some of the wonderful technology companies that this city has to offer.

Like all TechAlliance events, the atmosphere was friendly and casual, but with an ever-underlying element of business. Even at the awards ceremony, the mood was relaxed, and there was a smile on everyone’s face. A great place to network, and a great place to meet some of the other people doing great technology things in London.

The event took place at the beautiful downtown studios of London tech giant, Voices.com. What an incredible office space. The open concept, open-air headquarters takes up the entire seventh floor of the iconic Bell building at 100 Dundas Street. The 45,000 square foot floorplate is unique to downtown London, and allowed the world’s largest voice-over marketplace, the open space they needed to serve their enormous clientele. The state-of-the-art, innovative space, is the perfect location to both host the event, and to inspire the attendees as to just how globally successful London tech companies can be.

After a brief cocktails mixer, the awards ceremony began with the Community Engagement Award. Media Sonar Technologies, who provide an intuitive cloud-based platform that allows clients to collect and analyze open source data for relevant and real-time digital risk intelligence, were named the winner. They edged out SIXFIVE, a broadcasting and media production company that specializes in Google Grants for nonprofits and Pay-Per-Click advertising for businesses. Media Sonar have played a key role in helping organizations across private, corporate, sports and entertainment sectors achieve their business goals. Congratulations to both companies on their nominations.

Up next was the Startup Innovation Award. Nominated were VisitorQueue, a company with B2B lead generation software that identifies the name, contact details & user data of the businesses that visit your website; Dibbzz, a real-time seat upgrade solution to give fans of the performing arts, and sports the option of upgrading their seats to better ones; and TecVana, who assist clients with effectively reaching, engaging and competing in the new digital tourism market.

All three companies will ultimately be very successful, but Dibbzz took home the gold. Company founder Brennon D’Souza spoke at length with The London Beat at the mixer after the event, and was kind enough to share both his enthusiasm, and a look at some of the prototypes they are researching. It is an extremely interesting initiative, and very representative of the type of innovative minds that London is capable of developing. Much more to come on Dibbzz in the near future, as D’Souza executes his vision of selling people an experience.

Good luck to both startups Dibbzz and TecVana, as they transform their dreams into realities.

The final award was for Business Growth, and ostensibly lets Londoners in on which local companies have taken their operations to a higher level. Nominated were Northern – one of North America’s fastest growing eCommerce agencies, Zomaron – one of Canada’s fastest growing payment processing companies; and Mobials – a software development company dedicated to delivering digital retailing tools that drive high quality sales leads to businesses. The huge throng in attendance for Mobials erupted when their names were announced as the winners.

Following the awards ceremony, networking commenced with a few cocktails. This presented a great opportunity for the people that are in the industry, to meet and pontificate about all things technology.

Karen Chalmers from Big Blue Bubble was kind enough to chat about moving into their new studio – more on that to come – and some of the exciting things going on at BBB. There was a bit of geek talk from The London Beat here, because My Singing Monsters is well, My Singing Monsters. It’s one of the most popular children’s games on the planet, and BBB just released an update this week. Despite numerous attempts, no secret Easter eggs were leaked.

Public Relations Manager at Voices.com Trisha Beausaert, and Publicist Cynthia Nakad, were kind enough to give a tour of their incredible facilities, and talk a bit about what the company was doing. They have grown so exponentially, that it can serve only as inspiration to any London tech company, that you don’t have to go anywhere to make it big. Now serving some 500,000 registered users, Beausaert talked about community initiatives, the desire to hire local people, and while they are researching other cities for market expansion, they are proud to be a London-based company.

It was exhilarating to meet with some of the brightest minds that the city of London has to offer. Congratulations to all of the nominees, and to TechAlliance for putting together yet another wonderful event.

Awards may have been handed out, but the real winners are the people of this city who can look to the Technology sector as a driving force in London for years to come.

From the creators of The Great Canadian Caesarfest, the Ontario Beer Tour is coming to …