Get Ready For Punk Meets Metal Show At Old East 765

London music fans should put September 1st at Old East 765 into their calendars, for a great show called Punk Meets Metal being put on by The Forever Phoenix. Five bands in one night, that transverse musical genres from Punk, to Pop Punk, to Punk Metal, to Metal; plus a special guest performance by DJ Skelez.

In vintage musical circles, there was almost a snobbery for the particular genre that the circle was fond of. Pop fans liked Pop. Jazz fans liked Jazz. Rock fans liked Rock. And Punk fans liked Punk. Lines got a little blurrier in the late 80s and the internet blurred the lines even further with mash ups bridging even the zaniest of crossover productions. There is a more relaxed state of being for many-to-most music listeners.

When you stop looking down your nose at other artists just because of the genre of music that they play, and just listen, you’ll find there is, and always has been, plenty of crossover material to create symbiotic relationships.

Especially between Punk, and Heavy Metal.

We asked the guys from event organizers The Forever Phoenix themselves, for a more specific definition of what they think each genre represents:

Both have their own traditions and history – Heavy Metal emerging in the late 1960s with arguably the first accepted Metal album being Black Sabbath’s 1970s debut, Black Sabbath. They are viewed by many as the first Heavy Metal band. Other bands were Heavy but Sabbath personified and established many but not all aspects of the genre – a thick loud distorted sound with skilled musicianship particularly in the guitar solo department. With roots in the British working class culture, it is an anti-authoritarian, at times macho and escapist, celebration of life with roots in blues and psychedelic rock. Musicianship is appreciated, particularly in the guitar, drum and vocal departments.

Punk Rock has it’s own separate evolution. It is not a spin-off of Heavy Metal but shares many aspects of Heavy Metal, like anti-authoritarianism, loudness, agression, escapism. However it differs in many regards: there is a DIY culture regarding promotion and musicianship, it is politically more left wing, guitar solos are not generally prominent, and Punk also initially had more of an arty element.

Although some punk is macho, 1970s British working class punk and the more slightly bohemian US Punk, threw out the rule book and often featured female musicians and front-women, punk being an outlier for social change and non-acceptance of social norms.

So purists are right to argue that Heavy Metal is marked by skilled musicianship that you don’t find in Punk; but don’t ignore the similarities for the sake of your argument. Both are richly steeped in the British working class culture of the late 1960’s and early 1970’s. Both are against the establishment. Both are aggressive. Both are escapist. Both are loud.

Still, there was marked conflict between the two groups years ago. Los Angeles had a whole “scene” around the “Punk versus Metal” angle. In the very early eighties when Punk was cutting it’s teeth in the United States, there was some sort of rivalry, even if it was convoluted. Early local punk bands like Black Flag, The Screamers and Darby Crash, were considerably more politically aware than a diminished metal scene, and metal began to be looked upon at the time as out-of-date. At times things got violent.

However, while many will argue as to when there was some sort of convergence, most still agree that over the years, those feelings have changed.

Punk ultimately influenced Metal – it’s speed revitalized metal in the 80’s with bands like Motörhead, Judas Priest and Iron Maiden. That allowed some Metal fans to enjoy Punk – heck, even Metallica are fans of The Misfits.

Others argue that it was Seattle and the birth of Grunge that bridged the gap between Metal and Punk. Bands like Nirvana, Soundgarden, Mudhoney, and Mother Love Bone all blurred the lines with their attitude and soiled look, but all possessed that “thick loud distorted sound with skilled musicianship” that was supposed to denote them as Metal.

Nevertheless, despite the snobbery being gone, you still don’t get a chance to see a show that brings the two genres together. That’s what makes the Punk Meets Metal event worth putting on your radar.

Samuel Phoenix from The Forever Phoenix has worked tirelessly with networking, messaging and connecting with various artists to put together, and organize a stacked line up that is sure to please.

“We wanted to bring great live shows to East of Adelaide like the Embassy days – at an amazing venue like Old East 765,” said Phoenix. “We also wanted to give up-and-coming bands a chance to play with bands that have been around for awhile, and share the love of punk rock and metal music. We plan to keep doing Punk Meets Metal shows after the positive feedback at this point.”

The event takes place at Old East 765 Bar & Grill in the heart of EOA. It has a capacity of up to 500 when both sections are open, but the back section branded The 765 Backstage Lounge is where the live entertainment is hosted.

“Whether you’re in the mood for a Rock, Metal, Country, Indie, Hip Hop, Punk, or Goth concert, or a Drag Queen Show, or perhaps the world’s most ridiculous circus sideshow comedy magic extravaganza – it all happens at Old East 765,” said owner Jim Ferreira.

“We can’t wait to share this special night with these incredibly talented, inspiring amazing bands all under one roof!” exclaimed Trevor Jones from The Forever Phoenix.

The show will be headlined by CounterWait, a three-man metal band out of Cambridge, with catchy lyrics, harmonies and melodies. Over the last few years CounterWait has successfully introduced themselves to the Southern Ontario rock scene, and just released their debut EP.

“CounterWait is stoked to be back in London again! ~ Going to be a great night you don’t wanna miss!”

The evening will kick off with a special guest performance from DJ Skelez, who has been on the shelf for a year.

“It’s amazing to be part of this amazing lineup,” said DJ Skelez. “After taking a year off to work on two new albums and then to come back to perform with music that I love and enjoy and get to be on the lineup with these amazing bands is an honour.”

“Looking forward to seeing everyone come out, it’s gonna be punk-y.” – District Edge

Six plus hours of rocking and thrashing. Regardless of wether you prefer punk, or you prefer metal.

“Come and join us for an in your face, full-throttle, heart-racing, fist-pumping, foot-stomping, rocking night that will leave you hungry for more,” said Jones.

Tickets are just $10 in advance and available from band members, Samuel and Trevor, or href=”https://www.ticketscene.ca/events/21483/” rel=”noopener” target=”_blank”>buy tickets online. $15 at the door. 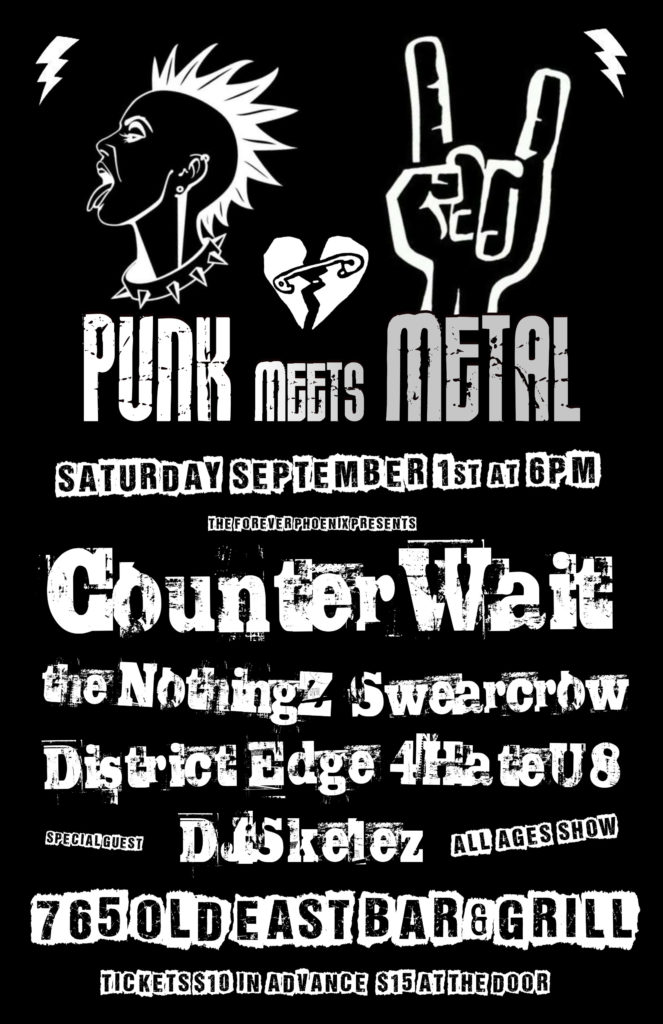