The London Knights completed three days of training sessions today, that were open to the general public. Londoners got their first chance to try and sneak a peak at returning talent and welcome new prospects to the Knights for the 2018/2019 season.

These training sessions are glorified scrimmages and you can’t always make bonafide assessments, or come to foolproof conclusions; however, you can pay attention to certain things like line combinations, power play units, and players that look more “comfortable” at this point in the young season.

Team Green went with the following line and defense combinations:

Owen Say started in net, with Brett Brochu coming in at 10:22 of the second period.

Team Gold went with the following line and defense combinations:

Jordan Kooy started in net, with Owen Willis coming in at 10:22 of the second period.

Team Green were the better team for the first two periods, but Team Gold started coming along in the third. On the strength of two second period goals, Team Green entered the third up 2-0 and managed to hold off a late surge from Team Gold, who scored with 16 seconds remaining to draw within one at 2-1. They also nearly scored on the final buzzer which would have knotted the game at twos.

The first line for Team Green with Moskal, Popov and Rowe was definitely the best forward line on the ice. Especially in the first two periods, where they scored both of Team Green’s goals. One of them came on the power play, when Popov feathered a beautiful cross-crease pass to Moskal who one-timed it into the near-side top corner.

Bouchard also had a strong game on defense for Team Green. He played with a maturity and confidence that stuck out like a sore thumb. Andrew Perrott also had a good outing, as did Antonio Strangis who earned some playing time on the power play with the first unit.

The young guns on Team Green’s fourth line also got a big “look” seeing considerable playing time, including some power play time in the third. Belio and Labelle are both only 17 but made good showings for themselves.

For Team Gold, Foudy was far and away the best player. Smooth skating import pick Adam Boqvist also had a solid game on defense, and recently acquired Matt Timms seemed to be settling in too after being picked up from the Peterborough Petes in a trade this week. Youngster Ben Rogers seemed to earn some extra playing time towards the end of the game as well.

It was a solid game overall, and fairly crisp given the time of the season.

The Knights’ coaching staff will get a better chance to gauge what the talent looks like tomorrow night when they play their first exhibition game of the year against the Sarnia Sting at 7:30pm at Budweiser Gardens.

Please be advised that the Gate 4 entrance and Gate 5 entrance will be closed tomorrow during the exhibition game, due to construction, so plan accordingly. Those are the two gates that are on Dundas Street. 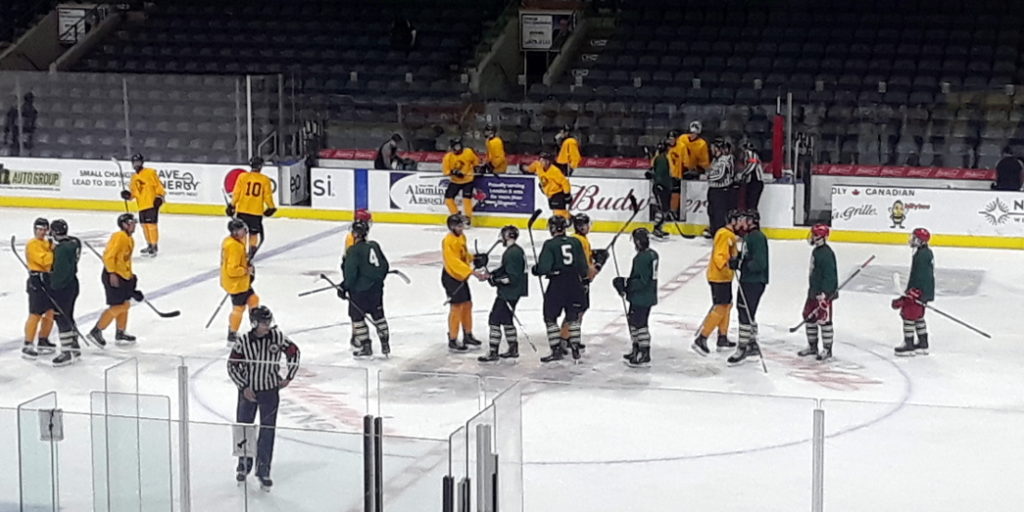