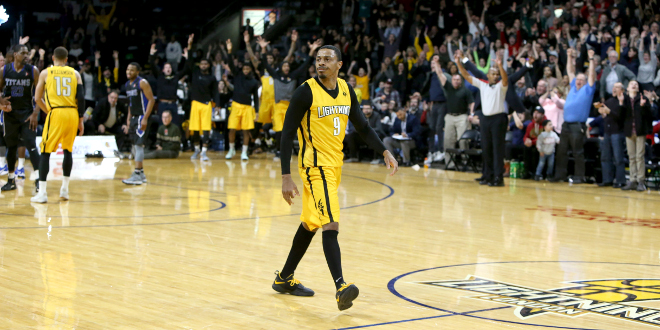 The London Lightning have traded Doug Herring Jr. to the Moncton Magic, in return for six-foot-eight forward Marvell Waithe.

The move came a bit of a surprise both because Herring Jr. was on London’s seven man protected list, and because he has been an integral part of London’s last two National Basketball League of Canada championships.

Herring Jr. averaged almost 15 points a game, shot 40 per cent from three-point range, and was third in the NBL in assists in 47 games. The point guard was arguably the most consistent player on the team, as well as a steadying influence.

With no guarantees that he would return next season, obviously London felt it was better to get something in return.

What the Lightning got, was a scorer who can shoot and rebound. The big Canadian split last season between the Magic and Niagara River Lions, after being traded to the Magic at the trade deadline. In 23 starts with Niagara, Waithe averaged 17.7 points a game, but in his seven games with the Magic that dropped to 11.7 points a game due to a reduced role.

The 30-year-old Toronto native has played basketball all over the world, having played in Denmark, Mexico, Lebanon and Japan before landing in the National Basketball League of Canada. He’ll be happy to be back in Ontario, as he has a young boy in Toronto.