Willow Dawson was the special guest for Tingfest’s Artist Talk on Saturday afternoon at The Arts Project. The timing could not have been better, as Dawson just released her much anticipated White as Milk, Red as Blood this past Tuesday, and it is currently on the Top 10 list at Amazon in the Storyteller category.*

London graphic novelist Diana Tamblyn tirelessly spearheads the Ting Comic and Graphic Arts Festival, which is celebrating their Fifth anniversary at The ARTS Project in downtown London. The purpose of the festival is is to showcase influential local graphic and comic artists. These talents are showcased in a gallery-like setting, and many of the artists participate in an intimate question and answer period to discuss their work and life, as part of Tingfest’s on-going events. 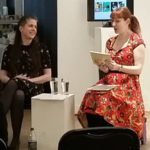 On Saturday, Linda Ludke who is the Collections Manager at London Public Library, sat down with Dawson as part of that series, to ask her thought-provoking questions about her work and her life.

The London Beat was fortunate enough to catch up with Willow before the chat, and find out some of the intricate details of how her latest project came to light.

After learning that five hundred 19th century fairy tales of Franz Xaver von Shonwerth had been rediscovered in Germany by cultural curators, Dawson set about on a journey that she whimsically described as “a proposal built on a wish.”

“I read an article in the Guardian, in 2012, that said that 500 new fairy tales had been discovered in Germany and I lost it,” said Dawson about the journey’s beginnings. “I had to push to make this book happen. I was so determined to make this book happen, that I pushed through every door I could find, saying ‘Please let me in!’. And then it happened. Knopf bought the rights to the book. We had no idea what the stories were like at that time.”

Even with rights secured, there were still challenges along the way. “When we first wanted to do the book, I sent a message off to the woman who had discovered the tales (Erika Eichenseer). She was in the process of publishing a non-illustrated book with Penguin USA, maybe Penguin UK as well so the agent got back and assumed I wanted to illustrate that particular book,” said Dawson. “So that was a bit of challenge explaining that I want to do ANOTHER edition of tales.”

Dawson said that once the project got rolling though, things went more smoothly. “Erika Eichenseer was totally supportive of the project. Once they saw that we were going to do something very different, they were like ‘this is cool’.”

Interestingly, Dawson said that she originally had no idea what the stories were about, because there was not yet a translator involved, and she doesn’t speak German.

The cartoonist and illustrator said that when she bought her first comic two pack as a child (Marvel’s X-men and Conan), she had difficulty reading them, so she would make up her own stories to the images in the comics. Often fairy-tale like because of the heroine needing to be rescued from the villain.

Those experiences are likely what led her to the process she now takes, which she described as ‘channeling her childhood nightmares’.

“We had a piece of land in the mountains of B.C. surrounded by forest and I would hear the wolves and coyotes howling at night,” Dawson reflected. “I was terrified of the coyotes coming to get me. Because they can throw their voices, and I found that really scary. So if they sound far away, does that mean they are close? Like right under my window? I was particularly afraid of the Grimms. I grew up on fairy-tales and the older versions of them.”

Drawing on those childhood nightmares definitely spawns powerful initial imagery in Dawson’s head, but she said that there is still a process to her illustrations as well.

“The assumption is that you’re going to illustrate exactly what the words say. And a lot of fairy tales are about the prince and princess living happily ever after and that peak moment of them kissing and being in love. The text and the image is not as layered,” Dawson explained. “What I wanted to do because I come from the background of comics, and the way I work with image and text, is do something that was much more layered and had more depth to it.”

That presented some challenges along the way in itself.

“It was a challenge to communicate that in house at Penguin Random house for my art director when she was pitching it. She did a fantastic job. But people assume with fairy-tales that the image and the text is going to say the same thing. They didn’t understand me when I said I wanted to modernize the tales. It really was an exercise in trust.”

Gaining that trust, channelling those childhood nightmares, and putting her own spin on the 19th century tales, has resulted in a striking, illustrated edition of the long-lost German fairy tales. The new book is beautifully bound with a canvas-like cover and gold lines, and is coffee-table book quality. Together with translator Shelley Tanaka, Dawson has brought these long lost tales unforgettably to life in the very first fully illustrated, full-colour edition of von Schönwerth’s work.

The vivid-colours throughout, and resulting rendition of the fairy tales, is nothing short of breath-taking.

One more little graphic morsel for Londoners, Dawson also shared that she likes to hide little “easter eggs” or vintage ornamental features in her graphic novels – things that don’t necessarily have anything to do with the story – so keep an eye out in White as Milk, Red as Blood.

How about an easter egg on what she has coming up next? 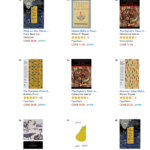 * – The best seller list at Amazon changes every hour, but at the time of posting, Dawson actually occupied two of the top 20 spots on Amazon’s top storyteller list -10th for the hardcover, and 18th for the Kindle edition.

Dawson’s previous works include Ghost Limb (self-published), Hyena in Petticoats (Penguin Books), Lila and Ecco’s Do-It-Yourself Comics Club (Kids Can Press), and No Girls Allowed with Susan Hughes (Kids Can Press). She teaches Creating Comics and Graphic Novels at the University of Toronto’s School of Continuing Studies and does regular Author Visits to schools, libraries and museums.

Thanks to Willow for so graciously giving her time to us, right before she did her talk.

Tingfest 2018 is exhibited in the beautiful space at The ARTS Project in downtown London. Full of cultural and historical representations, Tingfest delivers a multi-generational experience inviting even the youngest of fans to create their own Merle “Ting” Tingley inspired artwork. The pop-up comic shop at The ARTS Project is a delightful selection of graphic novels, colouring pages, zines and more.

There are often featured artists visiting the studio throughout the event, some there with their own families, like Eric Cator; so don’t be afraid to say hello.

Tingfest runs through to Free Comic Book Day on May 5th. Check their website for upcoming events like the Kids Maker Station, for a day of fun and creativity!

Previous Lightning Finish Off Edge And Advance To Finals
Next On The Beat: April 30th