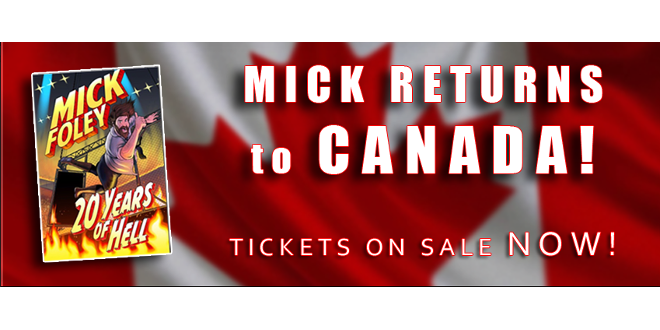 It’s been twenty years since the Undertaker threw Mick Foley off the top of a cage in the infamous Hell In A Cell match; two decades since what is widely regarded as the most “oh my god” moment in wrestling history. Foley’s acclaimed “20 Years of Hell” show about his perspective on the night, comes to the London Music Hall on September 7th.

London wrestling fans can count themselves fortunate to see the Forest City as one of select dates added throughout Canada in a cross-country tour, that follows an already successful tour of sold out shows across North America and Australia.

Mick’s night of storytelling gives his perspective of the now infamous 1998 King of the Ring match that made him a household name, and a hallmark of the WWE’s Attitude Era.

The match itself is the stuff of legends.

It was just the third time ever that the Hell In A Cell structure itself had been used. Always looking for a way to further thrill audiences, Foley took full advantage of the situation presented to him, and climbed to the top of the cage before the match even started. Mick said in his autobiography Have A Nice Day that he wanted to try and come up with something to rival the previous year’s Hell in a Cell at Badd Blood: In Your House that featured the Undertaker backdropping and slamming Shawn Michaels onto the chain-link ceiling of the cage.

In pre-match discussions with Terry Funk, Funk (in jest) said, “maybe you should let him throw you off the top of the cage”.

The rest is history. Foley first had to convince the Undertaker to do the spot, which he did despite Taker asking him, “Mick, do you want to die?”

Having convinced the Undertaker, Foley then painted one of the boldest psychological strokes ever carried out by a hardcore wrestler – he threw a chair on top of the cage and climbed the cage walls and waited for the Undertaker to come out to the ring – the top of the ring.

The crowd at the Civic Arena in Pittsburgh, Pennsylvania stiffened in anticipation. Sensing the symphony of violence that was about to unfold.

Not only were they not disappointed. It’s doubtful even the most blood-thirsty would have allowed themselves to imagine the carnage that would ensue.

The people buzzed as Undertaker came down the entrance ramp, and immediately began climbing the cage to join Foley on top. The two danced a little… there were a couple of chair shots… and then it happened… the Undertaker threw Foley off of the cage and on to the Spanish announcer’s table below.

Sixteen feet down or more, depending on who you ask.

And though it boggles the mind, and numbs the senses, that was just the start of it all.

A gang of WWE personnel that included Vince McMahon came out to help Foley, and even raised the cage with Undertaker still on top in order to get a stretcher out to ringside; but Foley apparently had other ideas. As they were wheeling Mick out, and the cage began to come back down, Foley inexplicably climbed off the stretcher, and headed back to the ring with a grin on his face. Mangled, but smiling.

He climbed the cage again. So did the Undertaker. This time, catastrophe struck even quicker. The Deadman delivered just a couple of punches before hitting Foley with a chokeslam, but when slammed down, the top of the cage gave away under his weight, and Foley went crashing down to the mat below. A chair from the top of the cage followed right behind, and cracked Mick in the face.

Jim Ross, “Will somebody stop the damn match?! Enough’s enough!”

But it wasn’t enough. Not for Foley.

Knocked out by the fall, tooth lodged in his nose, Foley still continued.

The Undertaker got into a dust up with Funk in the ring to buy Mick some time, and Foley disappears under the ring only to emerge with a bag of thumbtacks. He dumps them on the floor, and before long, is being backdropped on to them. But the spot is somewhat botched and Foley only picks up a few thumbtacks and apparently that’s just not good enough when you are the king of hardcore.

So Foley gets up, and the Undertaker then chokeslams him directly onto the entire pile of thumbtacks. Human pin cushion.

Tombstone. Three count. And an entire crowd sighs with relief that Mick Foley will not sustain any more damage.

Damage that ended up being one and a half missing teeth, 14 stitches, a concussion, a dislocated jaw, a bruised kidney and a dislocated shoulder.

Why would Foley keep getting up?

How did Mick’s family react to the match?

Find out yourself at a live Q & A session after the show at the London Music Hall on September 7th. Tickets are still available.

“I’ll be taking the audience on a thrilling and surreal in-depth experience as we relive one of the most infamous nights in wrestling history.” – Mick Foley

Get tickets and more information at www.realmickfoley.com/events