Masterpiece London Transforms Skyway Into A Work Of Art

The festival ran from Thursday through Saturday evening along the north side of the convention centre, and featured art, live music, food trucks and even a cool night market on Friday night with vendors, craft beers, and a barbecue. The whole event was geared to attract people that were interested in art, music, and downtown.

Throughout the festival, six critically-acclaimed muralists transformed the skyway between the Convention Centre and the DoubleTree hotel, by painting the giant concrete pillars that hold up the walkway. As Saturday evening came, the artists were putting their finishing touches on their artwork, and their masterpieces were starting to be revealed completely.

They are all… stunning.

Congratulations to all of the artists that shared their talents – Brad Biederman, Mique Michelle, Astro, Bacon, One Mind, and Meaghan Claire Kehoe. You have stamped an indelible mark on Downtown London and this city. 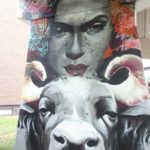 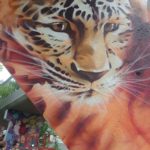 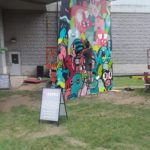 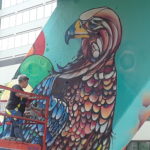 Despite vast differences in style and theme, all of them are beautiful in their own right. Perhaps one of the most interesting aspects of the project in general, is that the art’s variance virtually guarantees that at least one of the murals will evoke a visceral reaction.

The one that caused as much reaction as any, was “Bubalus Arnee” by Meaghan Claire Kehoe. Bubalus Arnee is the scientific name for the Wild Water Buffalo.

Have you ever had that awkward feeling when you’re in the presence of such obvious talent, that perhaps you totally missed the “talent line” at birth? That’s exactly what it felt like when Kehoe said that it was just the third time she has done a spray paint mural.

The 29-year old from Toronto said that she normally paints traditionally, and on 24×36 canvas. She said that the project did present some challenges like having to slightly modify her original drawing so that it would fit into the perspective of the concrete pillar that she had to work on.

Standing at the base of her beautiful piece of art certainly didn’t reveal any “challenges” whatsoever; in fact, it only made the scope and vision of Kehoe’s masterpiece that much more impressive. Despite the incredible detail, she did confirm that absolutely nothing but traditional spray paint bottles had been used in it’s creation.

“Bubalus Arnee is about strength and service to the earth,” Kehoe said, “And the power of the nurturing female spirit.”

The talented young muralist studied Illustration at Sheridan College, and after getting a French Honours Degree from Wilfrid Laurier University, studied Figure Drawing at Francois Rabellais Université in France. Her work can be enjoyed in over 40 Starbucks cafes across Southern Ontario, and various other commercial and private spaces. She also painted a pillar in Toronto, at Underpass Park.

Talking to Kehoe, two things were obvious: that she was passionate about conveying positive, social messages with her work, and that she had enjoyed her experiences in London immensely.

“I’ve had an unbelievable time here. The people that have come to the festival have been great, and the London Convention Centre and DoubleTree hotel have been wonderful.”

Kehoe also said that she had enjoyed meeting all of the other artists, and loved the graffiti medium, and would love to do more.

Considering her work at Masterpiece London, and the latest addition to her portfolio, that should be a given.

You can find all of the talented artists on Instagram:

We were at the festival when there were still a few hours left, so please visit the artists Instagram accounts to see the finished products.

Or just head downtown and check them out for yourselves!