Last week at the Wolf Performance Hall, award-winning Word of Mouth and Experiential Marketing expert Saul Colt gave a keynote speech called, “Laugh, Think and Cry.” The thought leader whose achievements have been featured in four New York Times Best Selling business books, has spoken at Stanford University, NYU, The Schulich School of Business, and now, to the London, Ontario digital community at the Explode Conference.

He was in a word, sensational.

Colt specializes in word of mouth marketing, customer experience design, guerrilla marketing, event marketing, traditional public relations, and social media that drive bottom line results. His speech gave examples of some of the incredibly creative things that he has dreamed up to successfully increase revenues or profiles for a company, and often at very reduced costs.

He’s a bit like a mad scientist. He’s so “out-of-the-box” that if you aren’t inspired by his ideas, you just don’t belong anywhere near Marketing. The premise of his talk was simple, all successful ideas make people “laugh, think, or cry.” While the premise is simple, achieving it often is not.

Colt talked about the importance of creating experiences, because that’s what people like to share. If you give them an experience that makes them laugh, think, or cry, they are more likely to want to share that experience with others.

“Wrap something in a story and it’s something people will remember,” Colt suggested.

He talked about going to a network event, and hiring a mime to come with him. Every time he met someone at the network event, he would tell them that he had been given the responsibility of looking after his brother, who could not speak. Then the mime would pop out, and the new network connection would play charades with the mime as they hashed out what would potentially just be a normal, possibly forgettable conversation.

Colt also said that it was important to, “capitalize on the momentum and timing of stories.”

The anecdotal evidence he provided for this, was one of the best moments of the speech – the whole day in fact. Colt described how he had been tasked by client FreshBooks to create a booth presence for them at the Paypal Innovate Conference in 2010, and on a shoe-string budget. He showed a picture in his presentation of a fantastic, modern booth, that he described as being in a row of $50-70,000 setups that he had to compete with. 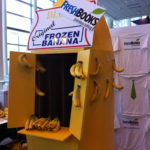 At the time, the TV show Arrested Development was hugely popular, so what Colt did was, had a a Banana Stand built that was almost an exact replica of the Bluth Banana Stand from the TV show. In a further brilliant stroke, instead of pens, or notepads, or other branded swag, they handed out 2,000 bananas. They replaced each sticker with a FreshBooks sticker.

Those who were fans of the show made an automatic connection and got excited by the stand, took pictures, and told their friends and most importantly, came away with an experience. Even those who didn’t know of the show still appreciated the spectacle of the stand, and the attention that it garnered.

As a last stroke of genius, they gave away the booth at the end of the show, to avoid having to pay four times as much as it cost to make, to ship it back.

“It’s all about getting people to tell the story for you,” Colt said. “Stunts don’t have to be expensive to outdo Facebook ads.”

The marketing wizard said it was important to try and remember to concentrate on inspiring people, not influencing them; because you can’t influence everybody.

Colt was working the audience the whole time he was imparting his brilliance. Injections of humour throughout kept the mood light, and the crowd engaged. An obvious veteran of many keynote addresses, he was loose, he was funny, and his message was positive.

“Have fun, take chances, because it’s noisy out there. Do something memorable.”

“Companies fail for two reasons… no cash flow, or nobody knows about them.”

Countless hilarious anecdotes of marketing brilliance, that left most-to-many in attendance just shaking their heads. All with the look of “why didn’t I think of that” on their faces. But smiling.

That smile is important. That smile denotes exactly what Colt had been talking about, about not trying to influence people.

Explode attendees didn’t come away from the speech spellbound, and thinking, “Well yeah, but I’m not Saul Colt, and I don’t have his penchant for marketing.”

They came away with a different reaction entirely.

Inspiration to not only apply what they had just learned, but to start thinking in that vein, the moment they left the Wolf Performance Hall.

It’s that inspiration that made Saul Colt’s “Laugh, Think, and Cry” address, such a memorable experience.

“My talk is all about inspiring people to take chances with their marketing. The world is a noisy place now and companies need to stand out or they could have a hard time with things,” said Colt at the end of the Conference. “My career has been all about standing out coupled with delivering results. I talked about the formula to do both, and I am happy with how it was received.”

Colt was available throughout the entire day, and couldn’t have been more approachable. Despite being the first on stage, he was one of the last to leave the conference, and was legitimately excited to stick around to hear Aaron Draplin, one of the other keynote speakers.

“I had an amazing time at the Explode conference. Being the opening keynote allows me to not only set the tone for the day but also lets me enjoy the rest of the day as an attendee,” Colt told London Beat. “My memories of my day centre around the people I met, and got to spend time with over lunch; and the hallway conversations.”

Congratulations to the Explode Conference for bringing such an inspiring speech, and speaker to the London digital community.

If you make your living in the marketing world, or run your own business, put Saul Colt into your stream of consciousness. His passion and his ideas will definitely open up your mind to new possibilities.

From the creators of The Great Canadian Caesarfest, the Ontario Beer Tour is coming to …