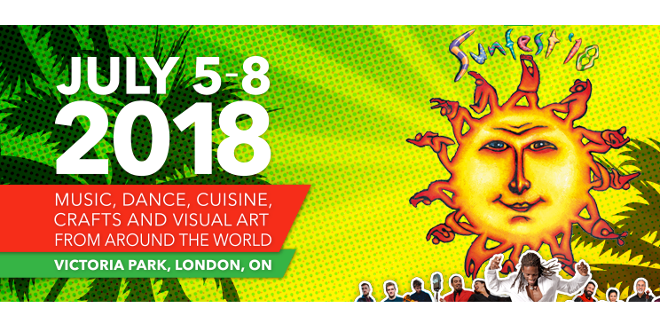 London’s top festival of the summer, and the biggest event draw in the city for visitors, starts tomorrow with the 24th Annual TD Sunfest ’18 World Music and Jazz Festival. Featuring more than thirty great performers, Sunfest will once again presents Londoners with unprecedented experiences in international music and entertainment.

Wether it’s the magnificent scale that the festival has grown to, or the incredible job of organization and preparation, somehow the festival always manages to outdo it’s predecessor in drawing top international talent. On top of the many ethnic styles that Sunfest brings, there is always also an eclectic mix of jazz, rock, and folk as well, to ensure that there is truly something for everyone.

This year Sunfest is featuring music from the hurricane-trodden Carribean, and “Roots, Riddims & Reggae performers”. Artists like the great guitarist and vocalist Sidi Touré, who brings the traditional Songhai music of Mali, and will headline on Thursday.

On Friday, Las Cafeteras will rock Victoria Park with their Afro-American beats, and unique East LA sound. The band wrap traditional San Jaracho instruments like the jarana, quijada, and tarima, around stories of love and justice in the concrete jungles of Los Angeles.

Alain Perez y Su Orquestra will be on the main stage on Sunday. The Trinidadian prodigy makes Cuban music with Flamenco, Jazz, and timba influences. Perez says that his musical search is about “safeguarding the past for a more friuitful future.”

There is also a huge lineup of great National acts, like Vancouver’s very own psych-rock band, and 2018 JUNO Award nominees Five Alarm Funk.

Many of the National artists have deep international roots, like Exco Levi, one of Canada’s most popular Reggae artists, who is based out of Brampton, but was born in Manchester, Jamaica. The FIVE-time JUNO Award winner moved to Toronto in 2005, and makes music to honour great Reggae men like Bob Marley and Peter Tosh, but with a unique twist.

Wesli is a guitarist and songwriter who was born in Port-Au-Prince, Haiti, but made his way to Montreal. His powerful message of hope combines Haitian traditions like voodoo and Rara, with anything from hip hop to Reggae. He has performed with some of the icons of both African Music and Reggae.

Of course, there will be mainstay Lazo. His roots reggae and conscious lyrics have delighted Sunfest audiences for 23 years – more than any other performer – and earned him the affectionate name of “Mr. Sunfest.” He headlines a special Celebrate Ontario project this year.

That’s just a small selection of the approximately 40 acts that will be performing at this year’s Sunfest. The four days offer a fabulous foray into the world of international music, and create an atmosphere that is unparallelled by any other summer festival.

There is always a unique vibe of joy and happiness surrounding Sunfest. It’s one of the things that makes it special.

It is also by far, the most sought after festival for crafters because of the incredible traffic that Sunfest brings. That means a completely jammed park of interesting things for the people that are visiting Sunfest to look at.

That same traffic appeal has done the same thing for food vendors. Not only will you see every manner of food vendor that you’re used to seeing at summer festivals, but you will see even more satellite foodies that only put their treats together for the grandest of festivals.

That type of food frenzy is another big part of what makes the festival special. Not just the tremendous variety of food options available, but the fact that the park is filled with all of those tremendous smells and food fragrances.

Combine that with the brilliant sounds of music ringing out from every corner of Victoria Park, it’s that fantastic physical assault on the senses that draws people to Sunfest from miles and miles away.