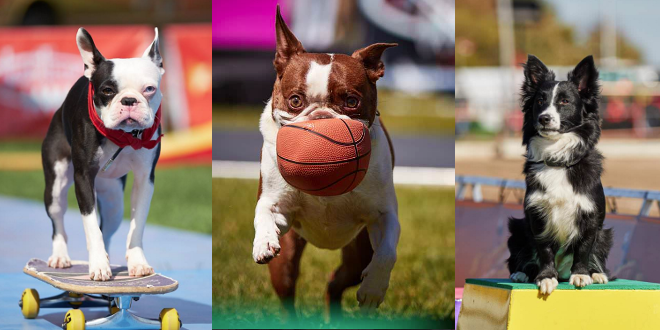 Ultimutts jumpstart this year’s summer tour at Woofstock, the largest outdoor festival for dogs in North America. On May 26th and 27th, at Woodbine Park in Toronto, Ultimutts will be putting on their show for the fifth straight season.

Ultimutts is also excited to be performing for the fourth straight year at Capital Fair. This ten day stop from August 17th to August 26th in the Ottawa area (Gloucester) will feature three shows a day at 1:15pm, 3:15pm and 4:45pm.

The show will also have an extended one week engagement at the New Brunswick Provincial Exhibition in early September. NBEX 2018 runs from September 3rd-September 9th, and is the longest running, and largest exhibition in the Atlantic Provinces.

Locally, Londoners can catch Ultimutts at three different shows – Dogfest at Fox and Hound on June 9th; Bark in the Park at the Plunkett Estate on June 10th, and at Storybook Gardens on July 28th. This will be Ultimutts’ owner Melissa Millett’s tenth straight Bark in the Park.

It promises to be another exciting, fun-filled summer for the Ultimutts crew and their fans, so get out and see the unique tricks that have landed these four-legged stars celebrity status, and worldwide attention.

Booking
The Ultimutts are available for fairs, festivals, zoos, theme parks, schools, and more! They provide everything from gating, sound, flooring, 5-8 dogs and 2 handler/performers. Email them for an information package

June 10: Bark in the Park – Plunkett Estates, London, ON

Storyteller. Community builder, content creator, sports journalist, and a proud Londoner for 40 years.
Previous On The Beat: May 25th
Next Lane Reductions On Richmond Street