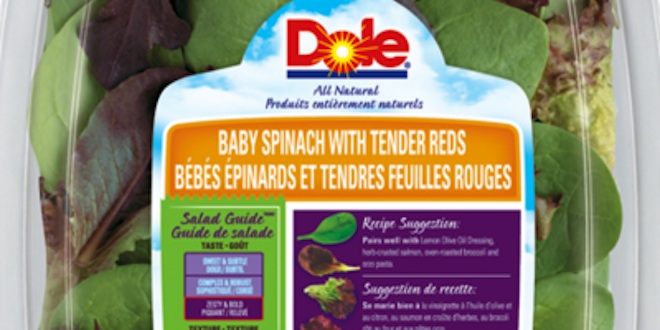 The Dole brand of Baby Spinach with Tender Reds, has been recalled due to concerns of listeria contamination. The recall is for 142-gram packages of spinach sold in P.E.I., Newfoundland and Labrador, New Brunswick, Nova Scotia, Ontario, and possibly across Canada.

No illnesses have yet been linked to the spinach, but Canadians are urged to throw out any recalled product, or return it to the store where it was purchased. The recalled product is in hard plastic shell packaging, and a listed best before date of 18-Au-04, with time codes starting with W202011, and UPC 0 71430 06069 8.

Be aware that the spinach may not look or smell off, but could still pose a health risk.

Listeria can cause listeriosis, which makes people very sick and in severe cases, can even cause death. Symptoms include vomiting, nausea, muscle aches and neck stiffness. Pregnant women, the elderly and those with weakened immune systems are at higher risk than others.

In 2016, the U.S. Department of Justice investigated Dole Foods Co. for a listeria outbreak that was linked to four deaths and dozens of illnesses. In that particular case, a recall was issued for packaged salads produced at a Springfield, Ohio, processing plant; but PC Organics products were also part of that recall. Fourteen cases of listeria in Canada were linked to the outbreak, including three fatalities as a result of the illness.

The CFIA is conducting a food safety investigation that may lead to a recall of other products. If other high-risk products are recalled, the CFIA will notify the public through updated Food Recall Warnings.