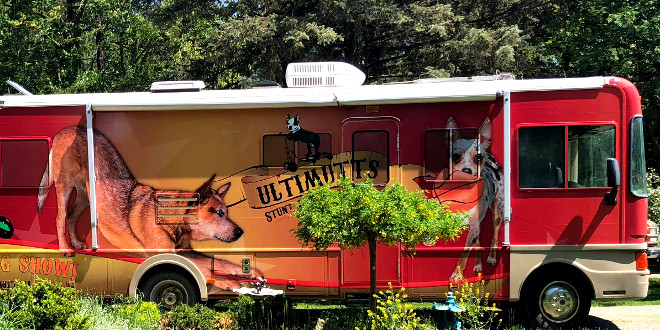 Ultimutts Kicks Off 2018 Tour In Style

The Ultimutts were at Woofstock at Woodbine Park in Toronto last weekend, and unveiled their great new branded recreational vehicle. Needless to say, Ultimutts owner Melissa Millett was excited about the addition, and getting it just in time for the 2018 tour.

Anyone who has seen the Ultimutts show, knows that those animals are very well loved and taken care of. Millett is a true dog whisperer, and her connection with all of her animals is a big part of what allows her to teach them such incredible things, like Bella’s walking handstand or Lollipop on the skateboard. The four-legged stars of the show were a big reason for the addition of the new house on wheels.

Millett said that on top of providing air conditioning for the animals when they aren’t in action, it also provides them with a safe confinement area. That can be more important than you think.

“One time the cat escaped her crate, and was playing beside the Little Ray’s Reptiles’ alligator!” exclaimed Millett.

That’s not a stunt anyone needs to see play out. So the new RV will help keep all of the animals safe, first and foremost.

The RV can also serve as a beautiful backdrop, which Millett says “saves a lot of time.”

On top of being beneficial for the animals, and making show set up easier, it’s also a great amenity for the Ultimutts crew. Millett said her favourite part is, “being able to sleep in the RV, and stay on-site, so that we can enjoy the festivals ourselves.”

Londoners will get their first chance to see the RV and the traveling stunt dog show, up close and personal next weekend, as the Ultimutts will be at the London Humane Society’s Bark in the Park Festival at Plunkett Estates on June 10th. They will also be at Dogfest in Sarnia at the Fox and Hound the day before (June 9th).

Check out all of the Ultimutts 2018 appearances, to see where you can catch up with them.